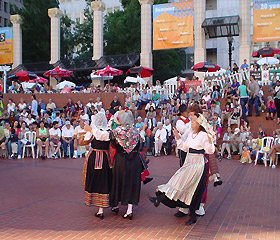 The Portland Saturday Market is held on Saturdays and Sundays from March until December. This thriving open-air marketplace offers local arts and crafts, an international food court, street musicians, special events and activities for kids. The Saturday Market is located under the west end of the Burnside Bridge.
» Portlandsaturdaymarket.com
» 503.222.6072

Art in the Pearl

Over 120 artists offer their works at the Art in the Pearl community arts event. Other festivities include artist demonstrations, music, and food. This festival is held in early September at the NW Park Blocks at W Burnside and NW Glisan.
» ArtInthePearl.com
» 503.722.9017

A festival that showcases Italian culture is held in August at the Pioneer Courthouse Square. The festival includes a wine garden, Italian food, dancing and live entertainment.
» 503.223.1613

Mt. Hood Jazz Festival is one of the nation’s premiere jazz festivals featuring local talent as well as some of the most well-known jazz musicians from the Northwest and across the nation. This festival is held the first two weekends in August at various venues in and around Portland.
» MtHoodJazz.com
» 503.295.6542 (tickets)

On the first Thursday of each month, the Pearl District celebrates the arts with gallery showings as well as sidewalk offerings from independent artists and musicians.
» FirstThursday.org

Every August for over twenty years, Portland has been celebrating The Bite of Oregon. Great music, food from some of Portland’s best restaurants and wine from over 20 wineries across the state are the offerings along the waterfront at The Bite Festival with proceeds going to the Oregon Special Olympics.
» BiteofOregon.com

Held right on the waterfront, the five-day Waterfront Blues Festival brings people from all over the state (as well as boaters) the hear some of the best blues bands from all over the world and watch the fireworks on the Fourth of July. Proceeds go to the Oregon Food Bank.
» WaterFrontBluesFestival.com
» 503.973.FEST

The popular Mexican celebration of independence is celebrated in Portland every year on May 5th at Portland’s Waterfront Park and includes food, music, dancing and fun.
» CincoDeMayo.org
» 503.232.7550

For the two weeks before Christmas, the Christmas Ship Fleet, averaging 50 – 60 boats, has been sailing Portland’s Willamette and Columbia Rivers for over 50 years.
» ChristmasShips.org

The top world-class women’s golfers play on tour at the annual Safeway Classic that is held in August at the Columbia Edgewater Country Club.
Safewaygolf.com
503.626.2711

In September, over 250 bands featuring all music genres perform at various places around Portland.
» Musicfestnw.com

Lake Oswego Festival of the Arts

The three-day Festival of the Arts features more than 1,000 regional artists in an open art show, a juried craft fair, music at George Rogers Park, and a performing arts series.
» Lakewood-center.org
» 503.636.1060

The Robin Hood Festival, held annually in July, began in 1952. Activities include a parade, a knighting ceremony, a castle-building contest, and an archery contest. The Sherwood Renaissance Singers perform throughout the festival.
» Robinhoodfestival.com
» 503.625.4233

Events at the Tigard Festival of Balloons include a carnival, music, craft fair, food vendors and a beer garden, a 5k run, night glow and plenty of hot air balloons!
» Tigardballoon.org
» 503.612.8213

This 53-year-old event is the nation’s oldest crawfish festival. There is a crawfish-eating contest, and crawfish cooked various ways, as well as other food vendors. The food, music, entertainment and fun can be found at The Commons by the lake as well as in Tualatin Park.
» TualatinCrawfish.com