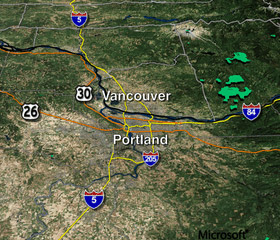 Everyone knows about cloudy, rainy days in The Pacific Northwest. Actually, annual rainfall is only around 30 inches per year, less than in many other states. Generally, cloud cover is common during winter but rainfall is often light, in fact, many people don’t carry umbrellas in the Northwest – it is very common to see joggers, cyclists, and dog-walkers out on rainy days. The climate is mild with warm, dry summers and cool wet winters. Severe thunderstorms and tornados, like those seen in the Central and Eastern states, are very rare in the Portland area. Snow is also uncommon, with less than six inches per year on average, often melting as it hits the ground. January’s high temperature averages 40.7(F) degrees with a low average of 35.8(F) degrees. In most years, sometime in January or February, there is a reprieve from winter with sunshine and slightly warmer days lasting about two weeks before the clouds set in again.

In Portland, spring is a gradual time of warm-up, with the sun occasionally popping out of the clouds. Since the Northwest basically has two seasons, wet and dry, flowers often bloom under grey skies. Grass is green year-round because of mild temperatures.

Summer is a great time to visit Portland. From late spring through early fall, high pressure systems keep the Pacific Northwest area sunny and dry with beautiful blue skies and great views of the snow-capped mountains. Summer is fairly short in the Northwest, with the sun coming out to stay from June through early September, so most locals get out and enjoy the great weather with biking, picnics, festivals, and strolling along Portland’s waterfront. Average high temperatures in August are 79.1 (F) with generally up to two weeks of 90 degree weather. Nights cool down quite comfortably with average lows around 57.9 (F) degrees.

Early fall in the great Northwest enjoys warm days and cool nights, with the rain and clouds gradually returning. Many people like to drive through the Gorge to Hood River, Oregon’s Fruit Loop to pick apples and enjoy the fall colors.
Portland Photos